Homescape introduces the player to a beautiful family mansion and the butler Austin, who is in dire need of decorating and renovating each and every room of the mansion. This game is developed by Playrix Games, the makers of Township and Fishdom, both of which are highly rated and enrolled in the Editors Choice list. The game brings out the interior designer within everyone, using its exciting and colorful match-3 levels. 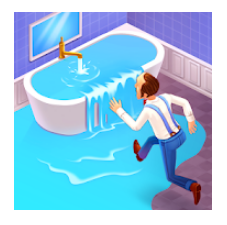 The makeover of the whole mansion includes furnishing and decorating all the areas within the house including the garage, hall etc. The game offers unique gameplay along with its exciting storyline which includes the backstory of Austin’s family. The well-built characters keep the players invested in the story of the game with whom the players can interact.

There’s the adorable but wicked cat – who stays alongside the butler in the game. In order to ensure the players have pleasant gameplay, the swapping and matching pieces in match-3 levels have additional power-ups and explosive combos. There are sufficient rewards available to keep the players invested as well as the ever-increasing chapters ensure more challenges to conquer.

This is an addictive game which fulfills the desire to renovate and decorate a home from top to bottom. The reviews support the fact that the game is fun and exciting to play. It is highly rated with four and a half stars, also is enlisted in the Editors Choice list of the Android play store.

If you want to play HomeScape on your desktop computer, you can easily do this with the assistance of a free android emulator. The emulator is not super technical, it just imitates the android operating system on your desktop computer. It is simple to download and install. There are several options for emulators, but we like the most recent update of Bluestacks android emulator.